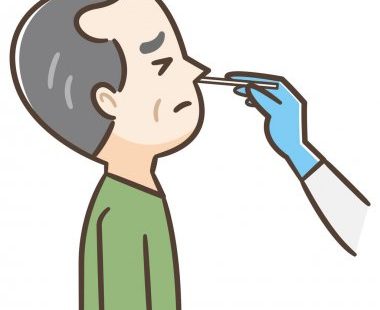 Ever since the world got caught in the tenterhooks of Corona virus, the thought of that dreaded swab being inserted into my nose was haunting me. Compounding this fear, were a million experiences of people who actually underwent them.

“My god. Nothing in the world is as painful as that PCR test” said some.

“I felt my brain being pulled out” said some more.

“I didn’t feel anything” said one more.

The one who did not feel anything turned positive, setting a kind of mindset that proved the age-old proverb “No pain, no gain”. Whoever said this must have undergone the PCR test!

I waited for a good part of 2020 inside the house and was successful in averting the need to undergo a PCR test. I drank hot water every day, wore a mask and kept a safe distance of at least 5 feet from others, wherever I went. It worked! Eddie uncle, who had disregarded all restrictions, the government had put forth was surprised.

“I never wore mask Anil and see nothing happened to me” he said.

I kept quiet, then.

“The authorities are scaring you, you idiot. Look at me, I am wearing no mask, I am going to church, shaking hands, attending weddings. Look nothing happened to me. You are just attracting the virus to you” he said.

I kept quiet then.

I never heeded to his arrogance.

I stuck to what authorities said diligently.

Anyway, after a year of lockdown and just a couple of blood tests, I had no choice but undergo a PCR test!

Eddie uncle was in the hospital battling against the dreaded virus. Luckily, he is now fine and out of danger and back home, always with the mask on, Cecilia aunty told me, laughing out loud. Nevertheless, I decided to visit him and he insisted I do a PCR test, before I visit him. Would you believe that? He is now an ardent advocate of the mask.

With great apprehension, I decided to undergo this painful test. Eddie uncle himself had narrated horror stories about that swab going in the nose and scraping a part of his egoistic brain.

As I drove up the ramp to the first-floor drive-through testing center, my mind was giving a thousand reasons, not to do it. However, my desire to see Eddie uncle was strong enough, not to make me bolt towards the exit.

“Check this video” Verina said, who was sitting next to me in the car.

I saw my idol, Sachin Tendulkar, screaming in pain as that swab went into his nose. He was just kidding, just as awareness to express gratitude to the healthcare staff. He mentioned having undergone 277 tests in the past one year and here I was taking my first test. Well, the video did not inspire me much!

But I did not bolt, either!

As I entered the neatly arranged parking lot, a whole different can of worms opened for me.

After filling in the online forms, we reached the place where two lovely health workers, clad in full PPE suits and masks, gestured to pull our masks down. The one on Verina’s side did her test and the one who was on my side looked like it was his first time too. The nose swab just did not enter my nose!

There seemed to be an emergency as we could see the health workers huddled up at a distance. The kind health worker who had attempted to take my sample the first time came to me.

“Sir, we apologize for the inconvenience” he said. “Sir, you might have to do the test again”.

I was caught completely off-guard.

The second time, the same saga continued. This time the health worker tried to put that swab, a bit more delicately by twisting the bud. It tickled and let out a loud sneeze.

He went back dejected.

Just then, a man in the black coat, who looked like the manager approached me.

“Sir, there seems to be a problem. The swab doesn’t seem to pierce through to your nose. It is the hair sir” he said without mincing any words and handed me a voucher for a free nasal hair removal in a salon in the same venue.

I could not utter a word. This was unprecedented.

“if you do it now, we will attempt to take your sample again” the manager said.

Verina who was sitting next to me controlled her laughter with a smile. “I told you, cut those bamboo shoots before coming here”.

“How would I know that these people use such delicate buds to take the sample”. I retorted, still recovering from the embarrassing jolt.

“It is good practice to trim nasal hair, once a while” she said calmly trying not to muddle my riled mind. “it has been a year!”.

“Nose and mouth are anyway under the mask. Who looks at nasal hair, for crying out loud” I gave a vent to my anger and headed straight to that goddamn salon to trim the savannah.

I did the test and obviously, it was negative. Which virus had the energy to pierce through the dense growth?