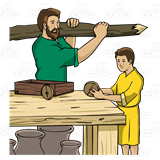 Every kid likes stories and it was no different with Ian. He loves stories- be it Mahabharata or Bible, Panchatantra or Jataka Tales, Arabian nights,or something we make up until we fall asleep. He likes them all

Every night we try to shun the storytelling responsibility, but never once have we succeeded. On my part, I have now completely exhausted the stories from my memory. It is surprising that I could remember only 4 or 5 stories from the Bible, a couple from Mahabharata and not even a couple from Panchatantra, perils of by hearting in school!

Apart from David and Goliath, I scarcely remembered any story from the old testament. I was so pathetic that some of my Bible stories had Kumbhakarna as the evil person, some had Bheema and David together fighting the Philistine army. I was ashamed of myself, but in the hindsight, how lovely it would have been if some of my woeful imagination was actually true!

Anyway, it was my turn that day, when Ian asked me “Dadem, which story today?”

“Today we will learn about Jesus and his dadem” I replied.

He was excited and so was I. In my mind, I had already painted a beautiful landscape of Nazareth and how Jesus was helping his dadem by chiseling wood, putting them together, and most importantly- not asking him to tell stories. I began

“Ian, you know what work Jesus’s dadem did?”

“No” He was definitely excited.

“He was a carpenter” I said.

He slipped into deep thought.

I shook him up “Ian, do you know who a carpenter is?”

The poor guy had no clue, however, he gave it a shot “Was he painting cars?” he questioned.

I swallowed my laughter, which disappeared into my tummy, rattling a few sections of the intestine and said “Of course. Yes”, and went on “Jesus’s dadem used to paint cars”.

I was amazed at how kids relate to things they have seen and experienced in their short life thus far. I also realized that Ian did not know who a carpenter was and did. In times where furniture is bought in a box from IKEA, it wasn’t surprising at all. At least I was lucky enough to witness these artists carve wonders out of wood. My mind still had those fresh memories of carpenters coming in their bicycles, every morning to make our furniture at home. I think that was when I developed the habit of putting the pencil behind my ear. Kidding!

“Which car he used to paint, dadem?” Ian asked.

I did not know much about Joseph anyway and so do many of us, so I made up a new 21st century Joseph for Ian. However, I began thinking about Joseph and how we rarely hear or read about him. I also began to wonder how mothers are given all the credit to a child’s upbringing while fathers are not. I almost swerved into writing about this discrimination, but then I thought if the lord’s dadem himself did not get enough mentions in the Bible and yet was quiet about it, who am I to whine? I went back to the cars.

“Guess which one?” I said turning up the excitement.

“No” I said “In those days, Ferraris were only in the city. Jesus and his dadem lived in a small town called Nazareth” I was teaching him Biblical geography.

“Did Nazareth have roads and signals?”

“Yes, but the roads were not wide. They were like dirt roads” I answered without thinking much about where the story ended.

“So, Jesus and his dadem must have been painting lot of 4 by 4s” he said.

I learnt that day what an influencer TV and the internet has been.

“What was Jesus doing with his dadem?” he was still hung up on the chores Jesus did in that imaginary garage.

“Helping him by bringing him paint, mixing paints, scrubbing the rust from car and many more” I answered.

“Was he a good boy like me?” His answer was within his question.

“Hmmm. Yes. He never went inside the car alone and never toyed with the buttons or the steering, especially the handles” I said to set an example.” He always used to wear the seat belt and sit on his car seat” I continued.

From that day on, he insists on sitting only in his car seat and reminds us about many things that we as adults tend to ignore.

I never had the opportunity to tell him about a carpenter yet, but i am sure Joseph will come up sometime soon.

2 thoughts on “Was Joseph really a carpenter?”