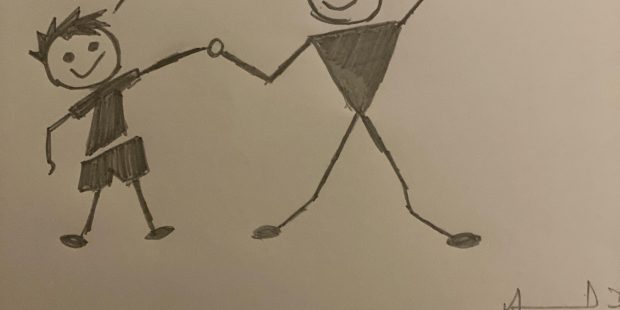 “Dadem. Where did I come from?”. Ever since we visited my cousin’s baby shower, Ian has been asking me this question.

Somehow, I was able to dodge this question, that according to me should be answered correctly. However, Ian was not ready for the answer yet. I don’t know how I will manage this question when the times come, but the way I managed now is a lesson for all parents what not to tell kids?. I am not very proud of the way I answered and was reprimanded by his mother immediately!

Looking back, I find it hilarious as it was one of the quickest examples of Instant Karma. One more lesson for parents- whatever you tell the kids comes back to you- one day or the other. Be careful!

After dodging the question several times, I thought of having some fun.

The next time he asked me, where did he come from, I simply replied “We got you from Baby shop, Ian. There was a sale”.

Ian likes his rides across the aisles in superstores. He sits inside his trolley and likes managing the grocery we get, often pointing at different aisles where he would like to visit- notably the chocolate and ice cream sections.

He kept quiet for some time. I had no idea what his tiny brain was thinking.

“Did you put me in the trolley too” his visuals of the grocery shopping had kicked in and I guess imagination ran wild for a moment.

“Which section was I in dada?” the poor chap asked.

“You were in the baby section in a shop called Babyshop” Babyshop is a famous retail chain in the UAE and we frequented there every week when Ian was little.

“I know Babyshop. Was I next to the trolleys?” his questions were quick.

“Yes indeed. You were next to the trolleys” I replied.

“But why did you choose me, dadem”?  he asked. This conversation had just lit some crazy thoughts on both of our minds.

“Because you were quiet and not doing masti”. I took this opportunity to instill in him some good ideas.

“Any kind of masti” I replied.

“Like this?” with his naughty smile, he went toward the heater, which was forbidden territory for him at home.

This winter has been the coldest ever in UAE and there were days when we had to use the heater as the mercury levels dipped to below 1 or 2 degrees in some parts of the country. As the temperature dropped to 15 or 20 degrees, our heater came out. “That is summer here” said some of my Canadian friends.

This had no effect on him. He stealthily encroached the territory.

“I still have the coupon Ian; I can still return you to Babyshop” I said.

“Dadem, please don’t return me. I will be a good boy from now. I will not touch the heater” he pleaded.

Verina, who till now was listening to our conversation yelled at me. “What the hell are you telling him?” She gave me an earful, before explaining to Ian, “Ian, you know where you came from?”

“No Ian. You came from heaven. You know, we asked God for a baby and god said he had one and asked us what would we name you. So, we said “IAN”. He was happy with the answer and he put you in my tummy and after 9 months you came out”

Wow, how simple! My mind was incapable of such reasoning.

I laughed “at least my story was interesting..Continue please” I said patiently waiting for Verina to reply.

“Do you know where dadem came from?” her reply was completely off the track.

“Lulu?” Ian’s gleaming eyes spoke a lot. Without saying much, he gave me an impression that he would go and return me to Lulu.

He continued “Do you also have the coupon to return?”

I could not stop laughing. Instant Karma. I have been careful ever since.

10 thoughts on “Where do babies come from?”