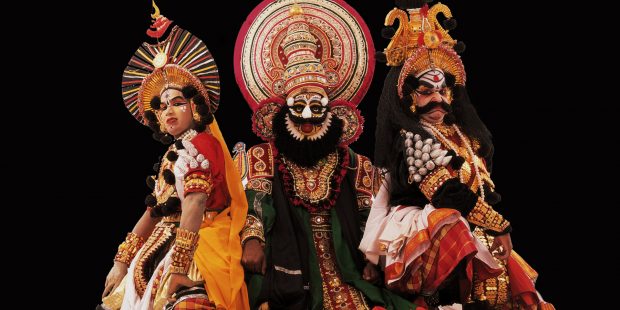 Manja was feverish with excitement as the “AATA” sponsored by Neil’s family was coming closer. It was less than a month away, but preparations and payments for the aata began months ago when my friend Neil’s grandpa paid the MELA- the troupe an advance amount. Neil’s grandfather was a great patron of this artform. Every year he sponsored an AATA for the villagers on the temple ground, which was not surprisingly, on his land. Those were the days when Yakshagana transcended religion.

Manja always reminisced those good old days “Those were the days when the troupe used to come in the morning of the play and put the CHOWKI– the place where the artists did their make up and dress and the RANGASTHALA-the stage for the play”. He was fascinated with every aspect of this dance-drama form.

Neil and I, were oblivious to these details and were interested in the glorious night we would spend under the clear night sky and twinkling stars, watching something about Ramayana or Mahabharata, both epics to learn so much from.

The CHOWKI and the RANGASTHALA were usually 100 to 150 feet apart, giving both of them, importance of their own. Lit with Petromax lanterns and some oil lamps, the area by today’s standards of lighting, I would say was poorly lit. Manja, in his quest to get onto the stage someday, used his influence to get the job of the stagehand or helper and he would keep the lanterns filled with oil. Such random oil runs with him, gave us plenty of insight into the skill and knowledge of these artists. They did their own makeup, often spending two to three hours painting their faces, as per their character. I have almost never seen these artists prepare from a script. These guys were adept in the few storylines the MELA’s picked, often becoming experts in one character, which they play throughout their career.

On the RANGASTHALA or attached to it, the troupe’s hands or helpers used ADIMANCHA, for the BHAGAVATHA and his musicians to sit. BHAGAVATHA was the most important part of this art form. The chief singer and director of the play, he choreographed and controlled the entire 7 to 8-hour performance from his position right behind the stage. The man sang! And sang so well! Those angry bursts, those mellow cries, and those loud guffaws still give me goosebumps. Along with the drums, the BHAGAVATHA breathed an air of mysticism into plays.

The sponsor was supposed to provide for the troupe’s food for the day. Back in the day, Neil’s grandpa used to provide rice, and many more ingredients to the troupe’s cook, who set up a makeshift kitchen close to the CHOWKI. It was simple food – rice, sambhar, and some vegetable and also Pepper Kashaya, which the artists and singers sipped every now and then.  I am not sure how this works in today’s modern world of catering and restaurants. The sponsor instructed the MELA what PRASANGA-play he would like them to stage. This often was decided months ago, when the troupe management collected the advance money.

The AATA began with drumbeating at around 6 30 pm and we all made way towards the paddy field. The audience sits right in front of the stage and the Bhagavata and the musicians are usually placed towards the back of the stage in full view. For today’s audience, this might be distracting, but back in the day, the dialogues between the Bhagavata and the actors enthralled the audience. Introductions, impromptu humor, and sometimes even silly fights broke out between the actors and the Bhagavata. Fascinating!

The performance began with young aspiring Yakshagana actors in young Krishna and Balarama characters. This is considered a good start and invariably these very actors turn into main actors in the MELA. Before the main prasanga starts characters are introduced and sometimes shorter humorous enactments are staged- by the KODANGI, baboon the only character that is specifically used for comic relief in an otherwise intense performance. Never have I seen a female play the female character in a play- it is always a male dressed up as a female. It is surprising why there is such a gender discrepancy in Yakshagana, however, now there are many females who have forayed into this cultural artform, which is a good sign. STumbled upon this article- A MUST READ

Hats off to this lady.

In the BAYALAATA’s, open plays that I have been to, there was no seating arrangement for the audience. The open fields provided enough space for people to sit and even sleep. Everybody got their CHAAPE carpet along with them to enjoy the AATA. Mid-January night is usually cold and I found most of the audience wrapped in thick blankets and monkey caps sipping tea and munching on the savories from the stalls.

For Manja, Neil, and me, this artistic foreplay was not as important as the play. Once it began, we sat through it without a wink of sleep in our eyes. The language used, Kundapura Kannada, the second-best slang of spoken Kannada as per our Kannada lecturer, provided a gusto to the play. The best, according to him is the Hubli Dharwad slang. I have a different opinion though! Well, everybody is entitled to their opinions in our country and that is why we have so many 😊, including me.

In the wee hours of the morning, as the Prasanga came to its climax, the entire set up including the stage, the dew, the crowing cock, and the early rising villagers gave an unforgettable experience, an experience which is still fresh in my mind, a feeling of how lively our lives were!

Looking back now, sitting on a chair, in front of either a laptop or a mobile, I feel that the real world is not in its glittering cities, but in the villages of any country.  The pulse of a nation can be gauged in the villages. When people, who love the foreign countryside and loathe the Indian villages ask me, a villager, what did I do when I was growing up, for pastime, I say “nothing”, because in spite of doing “nothing”, there was hardly time left to pass.

In my next concluding article, I would like to shed some light on some schools, literary work, and MELA’s across undivided Canara region of Karnataka. I am not getting into the nuances and fluidity of Yakshagana as I am not qualified enough to do this.

See you next week!

3 thoughts on “Yakshagana 3- Behind the Scenes”