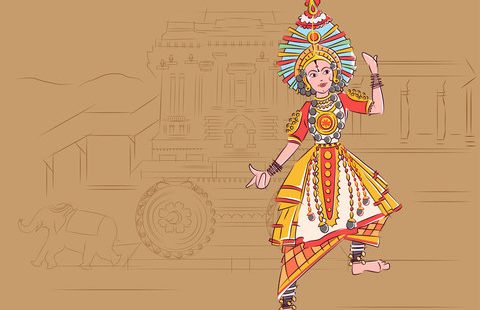 A passionate exponent of Yakshagana, Manja in his heydays as an artist was one of the most sought-after actors, but today he feels the charm of this ancient art form is waning, due to other artforms adapting to the needs of this generation- a generation of kids who need instant gratification and lacks patience and attention to wait for good things in life. They want it “NOW”- a trend, according to me, high-speed internet and busy bee parents, cultivated and nurtured!

Manja had the privilege to learn from the best of artists during the time we grew up and Neil and I are fortunate enough to see him play the nightlong AATA with aplomb. He was passionate and he was dedicated. How much he loved performing. He used to make us sit through his painstakingly slow self-make- up sessions, chatting about how he would set up the climax or how he would dramatically showcase his death.

He always said “AATA is like Test cricket, you know. How much ever fun, this 50 over cricket and 20-20 matches provide to you guys, test cricket like an AATA is the real thing. It is pure”

I can’t agree more. I have never seen a an artform which allows people to imagine the scenes being enacted by the actors. There was no screen behind the actors. The audience had a world of imagination to paint the background.

Is this artform towards fading into history? What is the way to revive it? Is patronage to this artform the actual nail in its coffin? Could it be turned into a profitable and viable opportunity for business people? Manja’s questions to us were varied and we never had and we don’t have answers to these.

Unlike other artforms, a Yakshagana artist is contracted for one season at a time, making this a volatile career choice. What about rewards? Those are paltry too! No way, in today’s economic situation, can a Yakshagana artist provide for his family with such compensation.

The training period of a good artist can last for up to 10 years. Observation is the primary teacher. The apprentice observes several performances picking up nuances of the artform. The training for a Bhagavata is even more rigorous- the apprentice has to train under a guru for 3 to 5 years, before he or she can even play in a professional troupe.

Back in 1968, Kota Shivaram Karanth had opened a school at Brahmavara to groom Yakshagana artists which lasted only for a year, due to financial problems. In 1971 Yakshagana Kendra was opened in MGM, Manipal, which is still active- http://yakshaganakendra.in/.

In 1972, Hangarkatte Yakshagana Kala Kendra opened its doors to train students on music and epics. Saligrama Makkala Kendra was formed in 1973 to train young boys to perform 2-hour programs across the state of Karnataka. There are many other schools that have opened and shut due to lack of resources.

The best way forward would be to have one or two schools, so that the best talent in teaching is garnered from across the region and crystallized into a syllabus in one school. The best talent would be scouted and students would get only the best. Well, I am not sure how viable this would be as this might completely snatch its old-village charm!

There are several Melas or troupes in the region – Saligrama Mela, Hiriyadka Mela, Kateel Mela, Kamalashile Mela, Mandarti Mela, Dharmasthala Mela and many more, fortunately, keeping this artform alive. There have been some performances abroad too, but has this revived the dance drama? I am not sure. The complete revival, as per Manja is only when a troupe performs in villages spreading the goodness of epics and religious texts.

Manja, who no longer performs is hopeful “Before my time in the world ends, I hope and wish Yakshagana will revive and attain the heights of Cirque Du Soleil”

I hope and pray too.