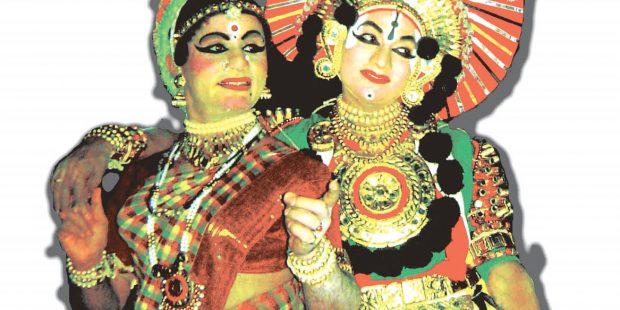 The effect of the “aata” lingered on for a while making us – Neil, myself, and Manja think more about this fabulous artform. Manja was particularly interested in performing on stage, whereas Neil and I were more interested in its history and nuances.

There is very little written about this art form, giving its genesis an air of mysticism. All of my research on this topic is based on secondary research, mainly through a book written by Martha Bush Ashton in the 1970s as her doctoral study. Would you believe, back in the day a western student chose our Yakshagana as a topic for her doctoral thesis!

I also had an opportunity to speak to a close friend of mine Mr. Shishir Kannantha, from Kamalashile, a gem hidden on the foothills of the majestic Western ghats. A sponsor of yearly “AATA”, he gave me valuable information on its glorious past, adaption and struggle of the current crop of “AATA” performers.

There might be a lot of literature available in local book stores in parts of undivided Kanara region of Karnataka and mainly in Kannada-the language in which Yakshagana originated and blossomed, but there is scarce information on the birth of this magical dance drama. Plenty of scholars believe that Yakshagana originated in the courts of Rashtrkuta King Nripatunga Amoghavarsha, who ruled from AD 814 to 877, giving the classical dance form a history of over 1000 years, whereas some refute this line of thought, putting forth an argument that the Kanara region was not within the realms of the Rashtrakutas.

One of the tallest Kannada poets of our times, Kota Shivarama Karanth believes and concludes that Gandharagrama was a predecessor to Ekkalagana, which evolved into modern-day Yakshagana. Both the latter forms were similar in their musical characteristics or ragas which made Karanth conjure a possible and believable source of Yakshagana.

There is a close relation between Gandharvas or musicians from heaven, and Yakshagana. As per Karanth, there was saying among local people that Yakshagana music could only be sung by this group of heavenly singers, as the pitch was so high. There is a mention of the term “ekkedigaru” which again Karanth believes is a term used for Yakshagana musicians.

All the above-mentioned facts seem hypothetical based on some very thin evidence and more of imagination by its advocates. There is some real hard evidence available in the University of Madras- a copy of 1556 AD inscription found in Lakshminarayana Temple, Bellary, Karnataka which records an endowment of land given for financial support to the performers of taale maddale in the temple. The taale maddale is an integral part of Yakshagana and the financial support to performers is a practice that is followed even today.

This could be the earliest literary evidence about Yakshagana. One more bit of evidence comes from Brahmavara- a palm leaf manuscript of a story called Virata Parva dated 1564, which is still performed by many troupes today. Other evidence is another palm manuscript dating 1621, which explains rituals before presenting the story, which is an essential part of Yakshagana.

Apparently from the late 15th century to the 19th century, there aren’t any literary works that deal with Yakshagana.

I was of the impression that the term “Yakshagana” is unique to Karnataka, more specifically to South Kanara, which is spanned from Mangalore to Byndoor. I was wrong! The term “Yakshagana” is used to describe various dance dramas of India- Yakshagana Kuchipudi of Andhra and Yakshagana Bhagavata Mela of Tamilnadu, Yakshagana Tenkutittu and Badagatittu of Karnataka.  This should give us, people of coastal Karnataka more reason to preserve this ancient dance drama, as it is one of the only identities which still remains.

Apart from the hypothesis deduced from the sparse literature of the 15th and 16th centuries, there are a few more theories relating to the origin of Yakshagana. Karanth believes the Yakshagana Badagatittu Bayalata originated somewhere between Udupi and Shimoga, because of Sri Madhvacharya who founded Dwaitha system of philosophy. As every Yakshagana aata is closely connected to Krishna and Balarama stories and prayers, moreover, Lord Balarama is a deity prevalently worshipped in Udupi compared to any other region in India, hence Karanth believes that this dance form might have born as a way to spread the doctrine of Sri Madhvacharya.

Yakshagana definitely needs more studies to preserve it through to the coming generations. I believe so far, it has been passed on through keen eyes and trustworthy mouths, which may not be the case in these times, where media distorts facts. A scholarly tome on Yakshagana is what is needed, which can be referenced. There might be one somewhere in the vaults of our age-old dusty libraries, which I am possibly unaware of!

In spite of such distorted origins, Yakshagana has held its sway over the coastal Karnataka region for centuries, which is commendable. The unique music, song, and dance, makeup, and staging have all got a mesmerizing effect on us- specially Manja who aspires to be an artist one day. I hope he becomes one, soon!

Found a great image that crystallises the origins of YAKSHAGANA. SUggest the readers go through this website- https://mydesigncreation.wordpress.com/design-projects/interactive-media-project-yakshagana-art-form/