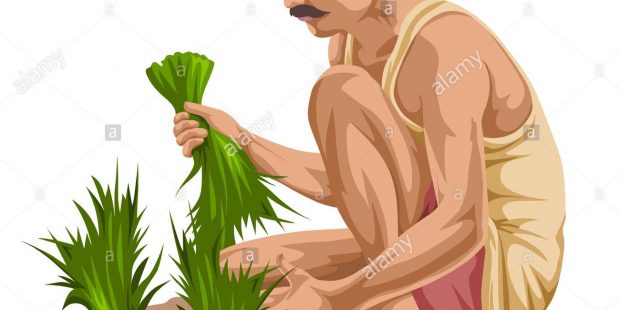 “Sakkad Sangatha Melyan, Sakkad lagi sarya”. The choir was loud and cheerful. Eddie uncle and I had just offered flowers for little Mary at the altar and headed to the grotto, where all children were ready with their flower baskets. There was variety of flowers- yellow shinvthi, Orage abolin, white mogrin, pinkish jidde, colorful dasavala. Many of the naughty ones had green leaves as a base and if it had rained the previous night water as well.

“Look, so cute these little innocent children look, with their colorful baskets” Eddie uncle pointed at a small girl, who was trying to fit in more than one flower in her tiny hands.

“Yeah” I paused and pointed at a naughty boy who had aimed his flowers right at the head of another boy standing at the front row corner. “Look at the not so innocent as well”.

Monthi feast, as far as I remember is the most fun festivals we had in the church, after of course Vodlein feast. It was celebrated as a harvest festival in the region. Nine days of novena, the hunt for flowers, precision of floral arrangement, pride when other people appreciate your flower basket, sweets at the end of every novena, a big tray of flowers on the feast day for the procession, sugarcane after the feast mass, unique odd number based lunch, vorn, and finally games and other programmes post lunch.

While I was lost in memories, children were getting ready for the last and third round of now what could be called throwing of flowers. Grotto looked colorful. Children at the front row were wet, yet enthusiastic. Everyone had smiles on their face. Many Hindu families from the vicinity of the church also attended this ceremony regularly, all smiles.

I popped the question to Eddie uncle “Why is that we make odd number of vegetables for Monthi feast?”

Eddie uncles smile vanished. There were a couple of boys who had succeeded in landing their flowers at the feet of Mary, who from a considerable height, smiled as always.

“Don’t you get better thoughts than these, Anil?” He looked at me and whispered as the priest was reciting the final prayers.

As we finished our replies of Amen to conclude, I leaned on the old man and said “I think it is important that we know about this. Don’t you?”  Reading Eddie uncles mind I continued “Don’t you dare wash your hands off this. You have been celebrating this feast for years now”.

I followed Eddie uncle: all the way to his home, discussing about how people south of Udupi till Mangalore eat vegetarian, people north of Udupi eat fish and many other varied topics. But at the heart of our discussion was the reason for odd numbered vegetables. Cecila aunty called me in for breakfast. She had made clams sukka, a staple around Halealve for breakfast, along with Pez.

“Anyways, the Home Minister has invited you. I will not be able to revoke it. Come; let us see why we prepare odd number of vegetables for Monthi fest” Eddie uncle had no idea about the discussion we would have.

I am not a heavy eater in the morning. I like my mild breakfast without many spices, but Cecila aunty’s Khube sukkah was well known and saying no to it was a sin. I helped myself for a spoonful of pez and a generous serving of Khube sukkah- a bit more than pez to be honest.

“Why do you think?” Without allowing Eddie uncle to settle down on the dining table, I resumed the broken conversation.

“What are you talking about”? Cecila aunty too joined in.

“Aunty, we were discussing about why odd number of vegetables are served for Monthi feast”. Cecila aunty too was fascinated with the question, but was quick to reply with the most sensible reason; we would get in our hour long breakfast.

“I think it is to do with luck. In ancient Hindu tradition, odd numbers means good luck. Haven’t you noticed people giving gifts in cash always gift in odd numbers- 101, 1001 etc. It brings luck. If we prepare odd number of vegetables, our yield for the next year is going to be good. The idea behind this is that one can spend 100 rupees or 1000 rupees, but 90% of the time, that extra one rupee would go into savings. I think it was to cultivate the habit of savings”.

I wanted to explore more “Sounds sensible. But do you think we would follow Hindu traditions?” I flared up religious sentiments, like most worthless politicians do nowadays.

“Shut up Anil. We are all one and I am done”. Cecilia aunty got up from the table, leaving her husband alone with me.

“Uncle, honestly I think there should be some weird explanation to it”. I tried to poke Eddie uncle, who was piling up shells neatly next to his plate.

“Anil. You know, I went to Thailand recently”. He continued without giving me a chance to meddle “Along with your aunty. Of course”. He smiled.

“I met a young girl: who told me a story. It seems she asked her mother why head and tail of fish were cut while frying. The answer she got was “I don’t know. My mother did it”. Then she went to her granny and asked the same question and she got the same reply from her too. Finally, she went to her great grand mom and asked the same question. It seems she replied “Child, my pan was small. I had to cut the fish, so that it could fit in the pan”. I think our ancestors must have found or randomly cooked some vegetables and one of their son: probably a nut like you, would have made note of this and somehow continued the tradition”. Eddie uncle was satisfied with the answer. It clearly showed as he helped himself for more coconut masala from the sukka.

“There are too many would have and could haves in this theory. Your wife’s theory had more logic to it” I curtly replied.

“Finish your plate and bugger off” Eddie uncle dismissed me.

“Do you think it is because we have 9 days of novena and hence odd number of vegetables” I probed.

“Maybe the rich could afford 13 or 15 vegetables or maybe they never ate much vegetarian food and hence their wives took this opportunity to feed their husbands and kids as many vegetables as possible. Like a yearly vegetable booster”

“Your mom was right. You really think out of your- you know where”? I followed Eddie uncle to the kitchen.

“Do you think it is because…..”. Eddie uncle cut me short.

“You know there is no significance to the number of vegetables on the leaf. The tradition changes from place to place. As you said earlier, people in Udupi and Mangalore don’t prepare fish on Monthi feast. We do. People have changed the tradition loosely playing around with the main theme of nativity and Mary’s birthday. Do you know in the gulf, the feast is celebrated on the weekend close to September 8th? As long as one has love for Mother Mary on the heart, we should be least bothered about what we eat. What say?”

I was dumbfounded and no answer to this profound philosophy of the man in front of me “Well. What do I have to say? I must say, I agree with you.  I think, I will ask my wife to make only one vegetable this year”. I smiled.

“As long as you enjoy the feast Anil. Have a blessed Monthi feast”. Eddie uncle vanished into his bedroom.