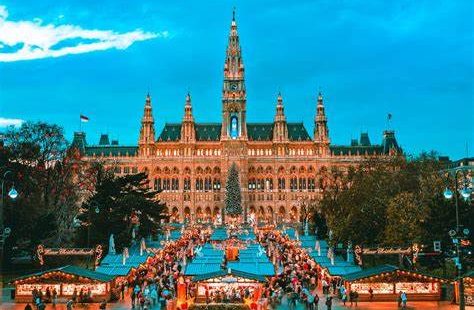 The final stop in our getaway vacation was Vienna. Vienna was always known to me as a place of grandeur- all my history books from class 8 to class 10 had at least one reference to the great city. Most of the time, the grand city came up in my textbook due to the one great man who I wish was never born- Mr. Hitler- the insane butcher of the Jews.

Anyway, my scout for books in Salzburg and Prague drew naught. Hence it was imperative that I stumble across a book store, by the grace of providence, or spend time looking for one and I had to hide my ecstasy from my wife when the former came true. The place where I had booked our accommodation was right in the center of the town center, with a huge books store 23 steps away.

Our journey toward Vienna begun from the town of Salzburg. As the train pierced through the lush green countryside, Ian who was enjoying his first fast train experience, made a new friend- Adrian, an American with a dad who loved idly and chutney so much that he had decided to marry an Indian and he did. Adrian’s mother was a Malayalee. Ian and Adrian instantly connected. He was about six or seven. Two hours were spent in good company speaking about different kinds of chutneys.

Vienna is just like how I imagined. The city had a touch of class all over. Bustling crowds, well-shaded roads, horse carriages plying tourists around the city centers main attractions, and happy people sitting in lovely restaurants, soaking in the sun, and sipping beer. It was a brilliant day, honestly. I still feel the Viennese sun on my skin.

Our accommodation was big- when I mean big, I mean by European standards. I had booked a three-bedroom for the three of us. I did not know that three beds were all put in one large room, in fact, one of the double beds was a sofa! But this was far better than the room in Prague.

Located in the middle of the town center, the entrance to our accommodation was spooky, with a giant door, which looked like it had somehow survived the onslaught of Hitler’s war machines. The door was shut and then I remembered the email which told me to call a particular number from the door and there it was, right in front of me- the phone on the wall. I dialed and the giant door opened, leading us to an even more spooky lift, which preceded Hitler’s time. We were on the third floor and it took ages to reach the third floor, creaking and cranking all the way up. As days passed, we all like the ride on the lift and by the time it was time to leave, the creaking and cranking sounded like music, which by the way is famed in Vienna, especially choir competitions, as we saw numerous choirs and beautifully dressed children up for the challenge. We were even lucky to witness a few rehearsals.

The city is full of old cathedrals, churches, and museums. After soaking in the history of the magnificent St Stephens Cathedral and peeping into the depths of the crypts below, we both were awestruck. The city was indeed filled with rich historical wealth. Every nook of the city was probably affected during those horrific years during the second world war. As we were roaming around the town center, we passed through a shop that stood out from the rest. Well, it might have stood out for us, as are more accustomed to the glitzy world. It was a cheese shop and being cheese lovers Ian and I had a ball of a time, trying most of what they had to offer. We promised to come back the last day to buy some, which I am sure the shop keepers must have brushed off. Being a tourist magnate, the lovely pretty ladies of the shop must be used to such promised from tourists. But we actually went back to the store and made a purchase, living up to our word.

Ian gave us a glimpse of his future. There was a girl, aged 8 or 9, who was strolling in front of the cathedral, when Ian slipped out of my clutches and stalked the girl, literally stalk. Verina rushed behind him to pull him and caught him saying to the girl “Do you want me to come in the merry go around?”.

Well, guts of the boy! We could not even reprimand, because he had done nothing wrong. He saw a kid and wanted to play with her, as we had not allowed him to go on the merry go around.

The very next thing we did was take him to the merry go around.

Not trying to be very adventurous, we stuck to the usual tourist routine- take a city bus tour and listen to the commentary. We went to the Belvedere Palace, then Schonbrunn palace and after a while, we forgot which palace we had been to. There are so many of them and the cathedral and churches were simply wow.

The best church I have seen so far in my life has to be a small insignificant church called St Peters church which was located close to our hotel. I have not been to Rome yet and I am told no other city can beat Rome’s architecture and churches. The city has lots to offer, but with our limited time in the city, all we could gather was a whirlwind tour of the city that covered the UN headquarters, the famed Viennese Ferris wheel, Dr Freuds offices, and home and many more monuments which I have forgotten. One of the reasons for forgetting is due to not recording the tour sooner. I am actually writing this almost after a year shows how lazy I have been. Apart from a few incidents involving food, I don’t remember much.

The one thing we did in Vienna was eat!

I remember the first day we reached, we were in this quite old famous Vienna restaurants trying out their Wiener Schnitzel– a batter-fried thin slice of chicken served with a piece of lemon. The restaurant resembled the Woodlands of Mangalore. The service we got was I would say not the best when compared to others for obvious reasons, I do not wish to elaborate on. We did the one thing we knew the best- adjust as we say back home or compromise as we say out of the country. The Schnitzel was nice and the food was great and as a habit, when we travel, we left a tip of 10% of the bill and we saw a sudden shift in attitude toward us. The waiter came rushing and so did his manager enquiring about where we were from and even explained to us the history of the restaurant. Some famous people had dined here before us.  When he came to know we were from India, he sang praises of our beloved homeland, which was so good to listen to. In spite of a big hole in the pocket, we both were proud of the fact that we were able to change the perception of our country in at least a couple of people’s minds.

Schnitzel became the staple food until we left, along with beer or wine. Ian was living on sausages. It was such a relief for us- hand him a sausage and watch him gobble it up. If he was hungry, he would ask for one more. How nice it would be if it were the same back home?

In between the city tour, my close friend who had been to Vienna told me to try their Sacher cake. Well, it was dessert and we both having sweet teeth, could not say no to it. Instead of trying only the dessert at their counter, we decided to dine in the Hotel Sacher. It was an experience. We were ushered to our table after a wait of 10 minutes. The menu was exquisite, both in writing and with the prices. Filled with antiquity, the experience of sitting in this place was something I, and I am sure Verina too will experience for a lifetime. Ian had fallen asleep and the courteous staff allowed us to put him on a nice couch next to us.

I remember a conversation with the waiter that went something like this.

“We have heard of the famous cake, but before that, we would like to have some sort of lunch” I said.

“Yes sir, our food is as famous and good as our cakes”. He was proud of the place. I like it when people take pride in what they do.

We looked at the menu and order three dishes and when we ordered the waiter said “Sir, I hope you have enough place for the cake”. He smiled.

“Well, I eat half a kilo of rice for lunch every day. You don’t worry” I winked.

The food was immaculately presented, but for us, who are used to quantity over quality, the food served got over in three spoonsful.

The cake was nice. Well, let me leave it there.

The last day, before we took our flight to Dubai, I forced Verina and Ian to come with me to the bookstore, where I picked up a book about Hitler and his skull. It was months later when I was reading the book, I understood that Hitler actually spent time in Vienna looking for a breakthrough as an artist.

Vienna is a great city to visit, but as I am writing this, I can still feel the aftereffects of Prague, more than Vienna. It is strange, but I feel I remember more of Prague than of Vienna. Maybe Vienna is more in the present kind of city, while Prague is still holding onto the past.