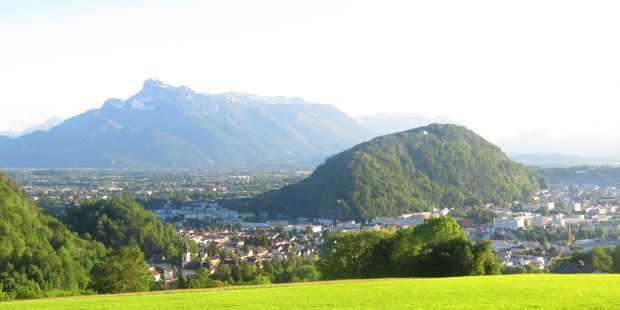 After an eventful train journey from Prague, in which we hopped between a bus ride and a train, we reached our destination- Salzburg. Our abode for the next two days was place on top of a hill- Schone . Both Verina and I loved the photos so much, that we had booked it without knowing anything about it. Fortunately, it was pleasant, a bit pricey, but pleasant. (www.salzburgpanorama.at). Gut feeling always is right.

The room had a nice view. We could see the entire city of Salzburg and the distant snow-capped mountains were a treat to the eyes. The elegant lady told us that the mountains still had some snow left, in spite of high mercury levels at this time of the year, which she said was unusual. If mountains provided a distant treat to the eyes, the field right out of the balcony provided a feast nearby. I saw something which probably I would never see again in my life- a bikini clad beauty on a tractor ploughing her field. Ian and I set our chairs looking at the sexy aunty. The sun glasses helped us evade the gaze of the shirtless man operating the hay baler: probably her partner. Ian helped by screaming “Hay baler” “Hay Baler”. Thanks to him, our general knowledge had seen a spike after years of inactivity.

The evening was relaxed, except for a small incident where Ian got his first booboo on the knee. The restaurant offered limited and expensive, yet delicious food. The walk down the hill is steep and a good 4 kms to the city and we had not even purchased a bottle of water, whose prices again, were over the roof. It was a nice place to stay, close to the nature, but a big pinch on the wallet. Breakfast at this place was very simple and I only had a couple of boiled eggs and a bowl of cereals with fruits. The spread wasn’t big.

Ian did not show any pain whatsoever and Verina and I took advantage of this and waded into the nearby field, where the sexy lady in bikini was ploughing field the previous evening. The edge of the field made way to a kind of a wooded area, the one we often hear about in Robin hood stories. We did not have the guts to venture further and we spent some time in this field. While Verina was enjoying the weather and the scenery, I was awaiting the bikini clad beauty to pass by. Never happened.

Our schedule for the day was not hectic. We had skipped the rope way into the mountains and opted instead for a salt mine tour in the afternoon.  We had an entire morning to kill. The only way into this small-town centre from our inn was by taxi, as we were perched on a mountain top. The lady who drove the taxi was strict and it was good as Ian, I think got scared of her and was immediately to his best behaviour in the back seat, with his seat belt on. She dropped us right in front of a church and we entered in. The church was an old one, not brilliant like some other European churches. Ian was roaming around the church as I took the last row and Verina took the first one. The area in between was his.

Without knowing what to do next, we entered into the park right opposite the church and it led us to the city’s most famous destinations- Mozart’s home and the amazing street which kindled so many feelings within me. It brought me some memories from Virajpet. I personally love cosy places and this street near to Mozart’s house was so cosy, nestled between a mountain and a stream.  We crossed over the bridge into Mozart’s home, bought some souvenirs, visited one more church, which was more elegant than the one we previously visited and by the time we finished, we realised our bus to the Salt Lake mine was in due in half hour. We had a 15 min walk back through the same park to the bus operators’ station. Quickly grabbing a hot dog for Ian, we reached 5 minutes early and were surprized to see so many people form Dubai waiting for the bus., just like us. Eid holidays gives residents of UAE such luxury.

Once in the bus, Ian was hungry and sleepy. He gobbled up his hot dog and in an instant was asleep. The stress of travel must have gotten to him. He must have eaten about a kilo of sausages since the time we landed in Prague. Anyways, there was surprize awaiting me and Verina. The tour guide just announced that the salt mine was actually located in Germany and we had to cross over Austria- German border. In the same breath she mentioned, that as tourists, there would be no checking. In any case none of the tourists carried their passports along.

The German country side is beautiful, to say the least. All those green fields and fierce streams, I had watched in Hitler movies, were real.  The weather was a bit cloudy and the powerful stream running beside the road is something hard to describe. On my frequent travels from Chennai to Kundapura, somewhere near Uppinangady, just before we began the ascent to the western Ghats, the Airavat crossed a similar terrain in Karnataka. Well, the power of this German stream was no match for the Karnataka one though. We reached the salt mine in about 20 minutes from the Austria- German border.

As we entered the lobby, we were given heavy miner coats to wear with helmet. Ian who was sleeping till then, woke up and was not interested at all in wearing his tiny overall and baby helmet. He began howling. However, Verina managed to pacify him and he was ready to go for a ride. Trouble began when we were made to sit on those trolleys on which actual miners traversed the length of the mine, back in the day. He was just inconsolable. The lady in charge informed us that they cannot leave with Ian crying. I was so uncomfortable and scared by looking the pictures hung outside. Being claustrophobic myself, ever since I donned those overalls, my heart wanted to abandon this adventure, but my male ego did not let me.  I really wanted to untangle myself from this mess and what an opportunity Ian provided!!

Even before Verina could look at me, I picked up Ian from her and volunteered to go out. There was a small applause from the people sitting in the trolley. Possibly because, their trip was now on track and also there was no irritation of a baby crying?

Our next stop was Hitler’s safe house, Berchtesgaden the only place it seems, not bombed during world war 2. Eagles which was Hitlers hideout is located here, which was shut for the winter and was slated to open the week after.We had some time to eat and shop and on our way from the market to the bus, the American friend from the bus said

“By the way, good you did not come to the mine. It was horrible”

I replied “Well, my wife said it was beautiful”

“Oh my god. It was. You are a great dad”. These words are still in my head. Whenever I think of Salzburg, the tall American words ring in my ear, making me happy.

The next day, we left this beautiful place with beautiful memories- to the capital- Vienna.