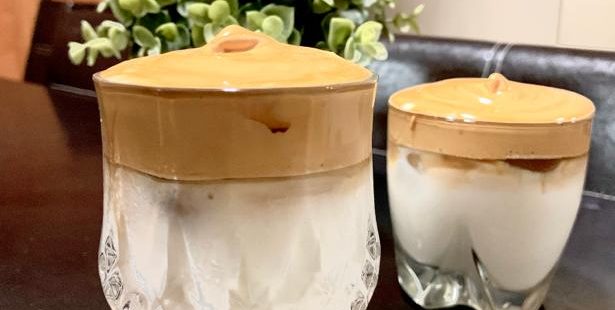 Just a month ago, our lives were unaffected, predictable with our daily routine – some of which we look forward to.

Many days later, as I was facing the (extended) lock down period due to the Covid 19 outbreak, I recollected that distant afternoon, when Eddie uncle took me Hotel Laxmi Nivas, when he introduced me to “Kalladka Tea” or KT. Oh my, what tea it was !!. One layer of tea and the other of milk with froth on top.

Sitting with Eddie uncle on the portico of his house, we reminisced the good old days.

“Did you ever think that we would be in such a situation, uncle”. I was staring at the unknown, literally like I had no idea what was in front of me.

Sipping the tea, Cecilia aunty had made, Eddie uncle replied “At least we are privileged enough to drink tea in these testing times, dude!. Shut up and drink. Once this is all over, we will figure out how and where to lay hands on a classic ol good KT”

I jumped up from my seat, spilling a bit of tea on my shorts, “Oh bugger!” Struggling to keep the wobbly tea inside the cup, I looked around hurriedly, my eyes trying to locate Cecilia aunty. Thank god she was way over the other side of the house/portico.

“You dumbwit! Do you want a divorce after this? You know they are already on the rise. Do you want to be one of them”? I was angry.

“Oye. I am talking to you”. I nudged him out of his reverie. “What are you thinking”. I demanded.

“Nothing”. He was on the edge of his reverie and hadn’t completely come out of it.

“Oh c’mon uncle. I am not your wife to shrug me off. Tell me”. I stressed.

“This is exactly what Cecila says”. He smiled.

That mischievous smile, which he is known for told me that Eddie uncle was now back to reality.

“Go on”. I joined him in his laughter.

“You know what”, he paused and after a while continued “I think this lock down is going to continue for some more time and I think you and I have to wait longer to get our hands on that KT”.

“But Eddie uncle, this tea is actually good”. I argued.

“Don’t be a wuss, Anil. She is not around and probably would be trying out a new saree. She then sends these pics to her daughter, who puts it up on her Facebook page”

“What? Is Jenny here?” I was curious.

“No re. She is bored in Muscat and your aunty is bored here and every single day, they decide on some task. Your aunty completes it and sends her photos. I can hear them laugh and sometimes even giggle like two school girls”

“As if Salman Khan is in their backyard, washing clothes”. He was visibly irritated.

“What is this Saree challenge”. He asked me as if I was the winner of that competition.

“I have no idea, uncle. Probably some nice way for Facebook to collect more information along with some beautiful pictures. But I know about Dolgona coffee. In fact, I have actually even tried it myself at home”. I plucked my phone to show him some pictures.

He saw them “Is it like a KT but for Coffee?”

“Could you try to make me some KT, Anil. Instead of this doing this useless stuff, you could try to some make KT. If you do make it, I will open an account on Instant gramand write on your wall”. This is a plea from a true tea lover. His allegiance to tea, was unshakable, very much comparable to that of, hordes around the world, to their political masters.

“Instagram, uncle. Not Instant gram”. I laughed with a face that showed joy in belittling others lack of knowledge.

“Whatever” He dismissed me “Don’t do that face again. It reminds of that gorilla’s arse, I saw decades ago in one of those zoos”. He rebuked.

He continued his rant “You know what Anil. I was wondering why our grocery bills are high. After this lockdown, your aunt has been spending more time on the phone and then in the kitchen. Yesterday she made banana bread, from the surplus bananas I got from the market, just case they became unavailable. Then she tried making that damn coffee also, I guess, as she asked me to beat something for some stupid coffee. Naturally, I ignored her requests since I was having a fun time playing this online Ludo game with my son, as he also is bored”

I smiled. “You are made for each other Uncle. A perfect father-son duo.”

“You know, Jason even advised me to spend sometime on neckflix. Do you know what that is?”, he added.

The older generation making an attempt to learn new technology was heartwarming.

“It is Netflix uncle and it is movies. I suggest you don’t do that. It is better if you read or even re read books. Netflix is addictive” I gave my honest opinion out of experience.

“I tried. I tell you, that technology is useless. Does not work”. Hearing him berate of one of the coolest things, that has made our asses stick to the sofa, made me smile from inside. It was better that way.

“People are in isolation- an unprecedented isolation. I think never have we in our life, spent so much time at home, at a stretch. We tend to get bored. Aunty and her daughter are spending more time on FB and phone. I’m sure so are you. Aren’t you?”

“That is true. I think this is a bad thing. This lock down has gotten us isolated within our homes”. Uncle had a valid point. “She on her phone, me on mine”.

“On the hindsight, don’t you think it has some good as well”. My “Be Positive” attitude kicked in at that moment.

Eddie uncle got thinking “Yes. Honestly, families have gotten closer. My brother’s son has made some WhatsApp group, where I forward all those messages. We spend everyday talking to our grandchildren. Honestly speaking, I kind of liked the banana bread baked by your aunt! Thinking of getting more rotten bananas this week”. That tinge of mischief, brought a smile on my face too, although not without almost cutting my ears.

“True, if you peep outside your own well, there are other things happening as well. Nature is cleaning herself. Pollution levels are decreasing. People are valuing certain things which they didn’t care much about, earlier. I hope, if we survive this scare, humankind will have learnt humanity. People are realizing their self and are appreciating the newfound respect in their lives. Most of them are reflecting their over the top indulgences as well”

“I doubt Anil. We are humans. Unless it happens to us, we don’t care”, Eddie uncle responded glumly.

“That is also true Uncle. But I hope, at least for a few days, we would learn from these tough times”. I added.

“As I said earlier, I very much doubt it. All these new hobbies of Dolgona and banana bread are going to stop, once the lock down is lifted. Old habits die hard. May be neckflix and instant gram will remain” Eddie uncle was slowly melting back into his sad reverie.

“Nettttt with a T, old man”. I interjected. There was no point. Ignorance is bliss. I decided not to pursue it further, afraid that it would kindle some curiosity in the old man.

Just then, Cecelia came out with two impeccable glasses of coffee, with a clear demarcation between the milk and the coffee froth.

“Wow” I exclaimed, whipping out my phone for a picture. “For Instant Gram”. I sneaked a peep at Eddie uncle and smiled.

“Tell him, I will try to do that damn KT tomorrow” She smiled

So, did I and Eddie uncle.