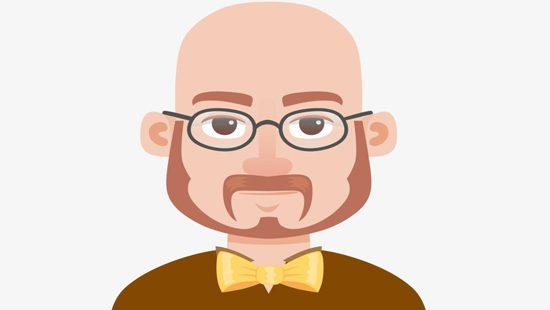 I was at the barbers last week – the barber or stylist -just being politically correct, whom I regularly go to, smiled, greeted me and made me sit on the chair. I have always liked reading magazines on the table at the waiting area, behind the chairs, but today was my lucky day as I was whisked straight to the execution chair. Usually a cheerful person, the stylist seemed a bit bogged down when he saw my rapidly receding pate. He smiled and even suggested to me that the next time I visit, he will have no option but to use the machine all over my head as it would take more time to find hair on my head and then cut those using scissors. I agreed with a hearty laugh.

As the stylist got busy finding hair on my head, I got busy looking at the million mirrors in front and behind me.  All I could see was a nice round Kiwi fruit. Yes, I was finally there- I finally had a nice shiny pate, thinly covered with some unnecessary hair. Being bald is considered a social stigma- young men dread being bald. They are always sympathized and ridiculed everywhere- college, university, at family gatherings. Advice about oil, pastes, weaving, wigs and many more things come from everyone, even from people who are remotely concerned about your wellbeing.

Well, I remember one incident where I was duped of a good amount of money by a total stranger. I was walking in an overcrowded street in the city to collect my wedding suit. I can’t stress more on the irony of this incident. Here I was, having overcome all the hurdles of being bald and yet finding the love of my life- my wife,  was going to collect my nice three piece black suit for the ceremony and I got duped by a petty thief who just with one look at my head, judged me quite well. Inside his head, he saw a fool who would do anything to get some hair on his head. Little did he know he was in for a bounty? He started with sympathizing with me by emphasizing on the fact that I was so young and yet losing hair. This was a good enough bait. I had bit the hook.

First, we went to a general store and bought a bottle of normal hair oil, then we (rather he did it deliberately) made our way deep into the labyrinth of this part of the old city and  finally reached an Ayurveda shop. I was made to stand on the other side of the counter. Anxious to get out of the hell hole, I nodded to all the crap these two morons said. When I look back now, I understand who the moron is.

He asked his accomplice to mix all the so-called hair enhancing powders into the cheap coconut oil bottle. Experience is a great teacher and such experiences make one wiser. At what cost? The duo had calmly filled up powders, which I am now sure were nothing but colored chalk powder into the bottle and the final package came up to an astounding INR 15,000 (converted at the value of INR then. In current times, the value has appreciated ?, incurring more losses for me). The money I had saved up for the wedding suit was now spent on hair oil. I am sure my dad has a Royal Salute, cheaper than this bottle of coconut oil at home. There was a tiny bit of light at the end of the tunnel, where I thought, I could still have my long thick hair of yesteryear, whilst I walked down the aisle. The only problem, I imagined would be to ask my brides maids to hold my braid instead of her veil. It was not the case though.

I did as I was told-Apply oil in the night and wash the overflowing hair in the morning. I even did it religiously for a few days, when I realized, I just had to cut down my honeymoon to a local one. I even paid RS 40 for the local train to get to our exotic honeymoon location.

Nevertheless, I stored the bottle for a few years before I dumped into the stream in front of my house.

I know people who have spent thousands of rupees to get hair transplanted, implanted and weaved onto their scalps just to avoid the stigma attached around it. There is a classic cycle where one goes through absolute denial of balding, then tries ways to hide it, and finally after being duped by a stranger, cares a damn about it. You know who I am talking about. That’s me by the way and thousands like me.

I used to blame my receding hairline on many things- Chennai water, weather conditions, my poor grandfather and also global warming. I also tried different ways to cover swathes of patches with the long weak hair from the sides. It was like I was trying to cover my dignity with a couple of thin threads. Neither the threads held, nor the patches covered. It took me a visit to the salon, where things fell into perspective. The guy at the salon, told me that I had a perfect head for a bald look. No one had put my baldness into perspective this well earlier. For the next three years straight, I looked like Bruce Willis – probably the malnourished version of him.

It is all in the head- literally. There may not be anything on your head, but the stigmata around baldness is all in one’s head. The more one thinks about it, the more strands fall off. There are many who have made millions by building business empires around baldness. I still wonder how some clinics know I am bald, when I haven’t even registered myself with them.

Well, It is all not that bad with being bald either. To begin with most bald men need not worry about shampooing and washing the irritable hair. A quick run over the barren land, during the morning brushing activity should be good enough to keep the area clean for a long time, whereas dandruff can be a constant worry as the pate with dandruff looks like a chunk of meat which is just kept out for defrosting, with scales falling all over the place and no place to hide. Often, my thinning head attracts a lot of flies and mosquitoes which is annoying. Nowadays my son considers my head as a drum. The joy on his face, when he bangs my poor head, rattling the tiny brain inside, is priceless though. I would go bald any day to listen to his faint giggles as long as he doesn’t take this habit seriously. I am also immune to the thoughts of avoiding graying hair in future- a thought which worries many people. One of the biggest con of being bald is photographs and how you look in them, not considering the excessive complaining of the photographer about the glare. Then there is always that aunt who sees the family photo and says “Haah, a little bit more hair on that head and this photograph would have been perfect”. To hell with her. Coming back to the ghastly act of organized loot of which I was a victim, my math says that by the time I am 50, I should have the money recovered from that ghastly basket who duped me of INR 15000- through various vehicles of disinvestment such as less visits to the salon, and subsequently complete riddance of shampoo from my bath.

Mocking the bald, just like body shaming, should be condemned, after all , hair is a part of the body or was a part once upon a time. There are some people I know who don’t mind mocking the bald, but take offense when spoken about their unimportant body deficiencies. Well, as mentioned earlier, it is all in the head and after an initial setback, a real bald man gets over it.

1 thought on “Bald and Beautiful”