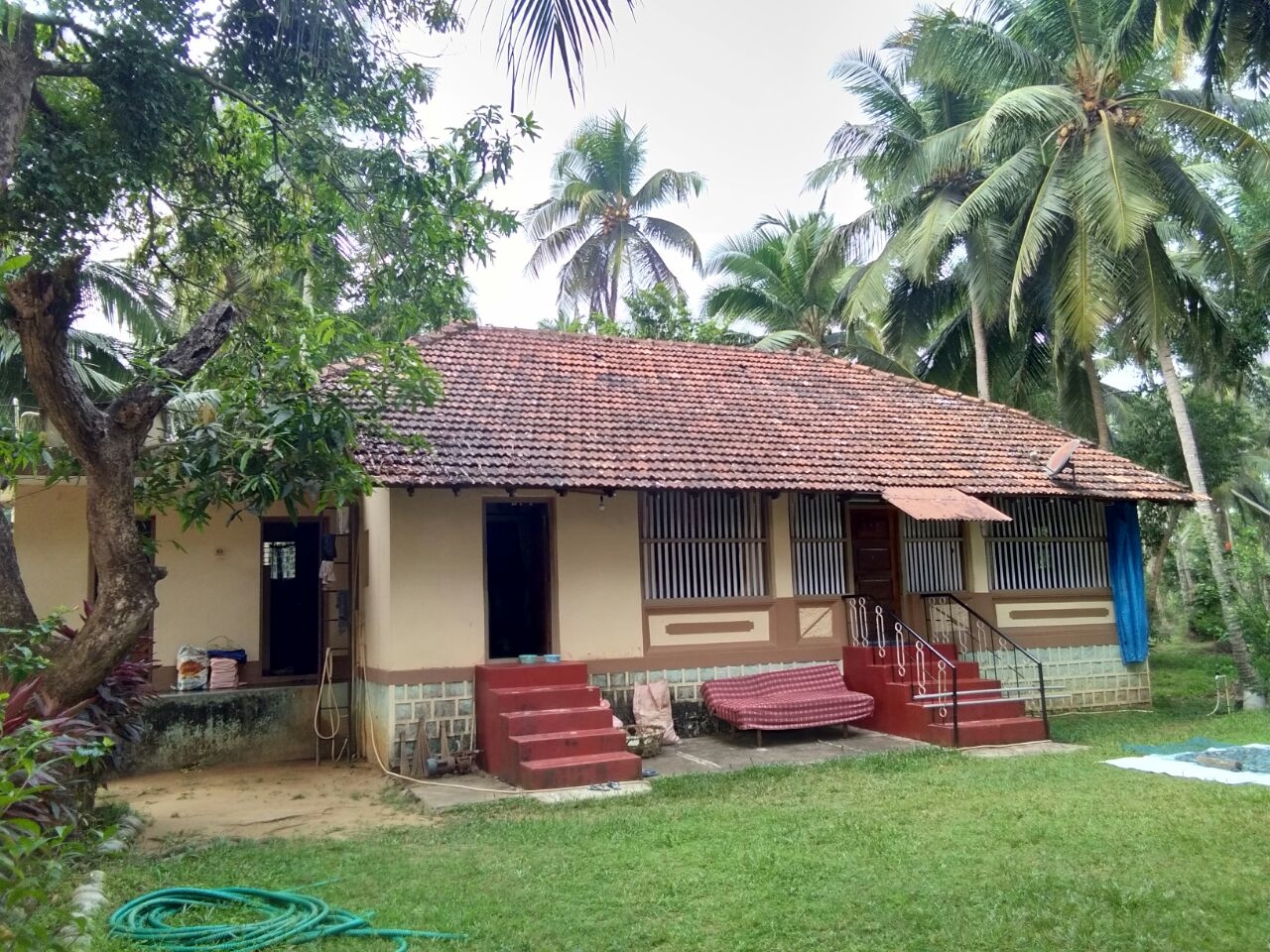 “Hey Uncle”. I screamed as Eddie uncle was stepping out of the Sunday mass. The beautiful church was always crowded on Sunday’s. He turned around, looked at me and smiled. I had just arrived the previous night from the university and was looking forward to spend the next two weeks at home, relaxing by the beach and eating some delicious fish curry and rice from my mom’s kitchen.

“Hey, you are back?” Eddie was cheerful and definitely happy seeing me around, but the tone concealed it well, leaving me confused.

“You don’t seem happy seeing me”. I asked him with a confused look on my face or I would rather say with a question mark on my face.

“Well, who is?” He guffawed at his joke. I always hated this attitude from Eddie uncle. Even though I knew he was a gem of a person from the heart, he had this quality, which instantly put him at a distance with anyone he met for the first time. One needs to know him well enough to realize this.

Anyways let me introduce myself, before I introduce you to Eddie uncle, my friend from the olden era, where life was so simple. My name is Neil, a third year university student studying at one of the prestigious universities in Mangalore, a good 90 kms away from my hometown- Halealve. Halealve, as the name suggests means an old estuary or a mouth of the river. “Hale” in Kannada means old and “Alve” means mouth of the river. It is a sleepy village, where Christians, Hindus and Muslims have lived in harmony and still live, without giving a damn to the politicians. Actually, there is a church right in front of a Hindu temple, just about 2 kms away from a mosque. Gods too have finally found a place in a troubled country ripe with religious strife. The village is about 4 kms away from the town-Kundapur, on which the entire population of Halealve depends on for everything. The village is located on a pristine white sandy beach and one can find almost the entire population of Kundapur on this beach. Fresh air and the view of the sun signing off after a hard day’s work providing us light and warmth is a sight to watch.

Enough about me; let me introduce you to Eddie uncle.

Eddie uncle was born along with a new country- India. Yes, at the stroke of the midnight, when the world slept, when India awoke to light and freedom, miles away from the parliament in Delhi, from where Nehru delivered his most famous speech, down south in my sleepy village of Halealve, the Mascarenhas family heard the first cries of Edward Antony Mascarenhas, the first of the 9 siblings he was eventually going to have and take care of. The same day, the population of Halealve raised by two more children- Gopala and Nazim, who eventually would form a formidable trio along with Eddie uncle in the days to come in the government school at Kumbri.

Usually Eddie uncle reminiscences his good old days – about his school, about the village, the fish, the church festivals, the temple annual Jaatres( temple festivals),  the kodi habbas, the Yaskshagana aatas they slept through, about the mutton biryani they ate together at Nazims house during Eid,  the goli aatas, about the girls they mildly eve teased  and many more. Today, I didn’t know what to expect.

“Yesterday uncle. Exams are finally over and I will be here for the next two weeks, before I head out to my final year in the university”.

“My oh my. Two weeks?”. He did it again with a sharp twinkle in his eye.

I never minded as I knew he was just joking. This habit of his, has many a times landed him in deep trouble, but for some reason he has never changed a bit. When I asked him about this he was like “That’s is how I am puta”.

“How is Cecilia aunty, Jennifer and Jason”. I enquired about his family as we headed to a nearby Kini maam’s hotel for hot buns and tea.  This was a Sunday morning routine now, for the past three or four years. Kini maam made amazing buns and tea was one of his best kept secret. Kini maam’s hotel was a portico of the house converted into a hotel, with three benches and two tables. Tables were for the people who ordered food and the bench was for those who dropped by for a quick cutting cha.

“They both are good re. Jason is working in Saudi. Jennifer is expecting by the way. She too is in Muscat along with her husband”. Eddie uncle stopped to wave at Nazim’s son Suhaib, who just strolled by in his cycle.

“Oh That is nice. Convey my wishes to her” I was happy for Jennifer who was about 4 years older than me and was like a big sister to many of us in the village. Jason was about a year older than me and just graduated in engineering and headed to the kingdom to work in one of the oil refineries there.

“You forgot about your wife”. It was my turn to fiddle around with Eddie uncle now.

“Well she is pretty Neil”. I was actually expecting this response from Eddie uncle. I have asked him a million times and he has given me the same answer a million times. He continued “You should stop asking married men about their wives. Do you think they will ever say anything bad about them”. Eddie uncle said spitting a mouthful of buns into the table.

“Ah. She is good re. Got a bit of knee problems, but otherwise fit” Eddie uncle was now fully into his breakfast.

Kini maam always kept the morning paper by Eddie uncle’s side, when he came in, as it was his habit to read the headlines whilst sipping tea. “Ah . India lost again. I say our government should ban this stupid game of cricket and give more preference to kabaddi instead”.

India had just suffered a whitewash in the recently concluded Test series in South Africa.

He continued “ You know these new guys are not even capable of tying the shoe laces of Tendulkar, Gavaskar and Kapil Dev and they yet they are paid in crores” He vented his anger and I must say a bit of jealousy at the current crop of players.

“There is more money in the game now uncle, unlike the olden days”. I too had just finished my breakfast and now joined Eddie uncle who had relegated himself to the benches , making way for the new set of people who had come for breakfast.

“Whatever Neil , Kapils devils was the best team India ever had. You know there is no footage of his famous 175 not out, because BBC was on strike that day. And now, even if a player farts the sound is picked up by that nosy journalist who only shouts at the camera. Arrrgh, I forgot his name. Who is he?”

“Mr.Goswami”. Clearly the nosy journalist had made a mark in a remote village like Halealve.

“Yeah. He is irritating”.

“Stop watching him” I said calmly.

Eddie uncle continued “I remember that day vividly. I had come from work early that day, pretending to be sick. The walk from Kundapur was actually never ending. You know there were no busses those days and we had to walk. Luckily your dad and I could to afford bicycles. Your dad then purchased a nice scooter for Rs 300”.

“I know. A lambretta”. I answered

“Yes. Those were good days Neil, good days”. Eddie uncle loved talking about his encounters and friendship with my dad and my other uncles. This is where our friendship began. I must say this and also the fact that his children were now far away drew him closer to me than ever. I was glad that Eddie uncle was my best friend, even though he was a good four decades older than me. Our bond was strong and he was at times my mentor and critic as well.

My phone just rang. It was a call from my mom and I needed to be home, as I had completely forgotten about the chicken to be collected from Suhaibs’s chicken stall. Sundays without chicken was like Christmas without cake.  Eddie uncle too made it a point to buy chicken from his best friend late Nazim’s son every week.

“Uncle I have to leave now. Anyways I will be around for two weeks. I would love to listen to your tales everyday”. I pacified him.

“Yes sure. I will see you soon” Eddie uncle bade me goodbye.