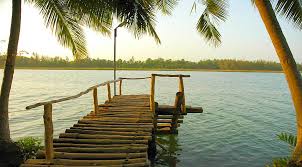 It was the summer of 1994: I was about 10 years old then and this was the first time in my life I met Eddie uncle. Mr. Vajpayee was sworn in as the PM of India and I think Indian politics was beginning to look for alternatives to Congress. Sachin Tendulkar was slowly turning out to be the mainstay of Indian batting line up and I was I think in grade 4 or grade 5.

My mom had sent me to fetch a fresh pot (chembu) of milk from the nearby dairy in the morning. I had two chores in the morning- first one was to tie our dog- Tiger and second was to get milk from the dairy. Tying our dog Tiger was a task because he used to run around the trees and give me my morning dose of exercise, before he came wagging his tail and lowering his head as an act of surrender. There were lot of villagers who woke up early in the morning to milk their cows and send liters of milk to the dairy.

Anyways, we had visitors every morning and mom used to be busy preparing tea for everyone who came. This day was no different. We had some visitors and there was this gentleman, who I was told had come from Kuwait. Kuwait was a name everyone’s lips then, because of a certain gentleman called Saddam Hussein. The gentleman who visited dad and us that day was none other than Eddie uncle. If first impressions were supposed to last, this would have been my last encounter with him. But believe me, first impressions sometimes are not the best ones.

He greeted my dad and mom with a customary “How are you?” and then turned to me “Your son?”. He looked at dad.

Eddie uncle simply smiled and ran his hands over my head. The smile was not a good one. It was a sarcastic smile and I can never forget the look on his face till this day. When I was alone in the kitchen with mom, I asked her “Why was that man laughing at me”.

Mom must not have noticed “Was he?”. I did not think it wise to pursue the topic anymore. In case I meet him again, I would ask him myself is what I decided.

Mom also told me that Eddie uncle was an old friend of dad’s and he was in Kuwait for a long time along with my dad and a few others from our village. I nodded and went out to the portico and lowered my bottom into the easy chair at the corner, pretending to read the newspaper Udayavani- the lifeline of the coastal belt.

Dad and Eddie uncle were discussing politics, Kuwait and other things – just the normal morning chit chat. Mom had served piping tea and some biscuits and I was watching Eddie uncle from behind the third page of Udayavani. I just did not like the way Eddie uncle sipped his tea. He slurped his tea and as the tea reached his throat, his tongue stuck out. I could not stop laughing. Well this was my revenge to his sarcastic smile. By the way he does that even today.

I was overhearing Eddie uncle speak to my dad.

“Well, Rony. I have left Kuwait for good now. I want to check out some options to start a business here”

My dad was already running a successful business in Kundapur and I thought it wise of Eddie uncle to have asked some advice from him.

“Eddie, I think you should do what you know the best- cook. You should start a fast food joint or a bakery in town. We only have one god bakery here and you can actually create some competition to them”.

I later was told that Eddie uncle was a baker in the ruler’s palace in Kuwait and used to bake delicious cakes for each and every one of his Halealve mates birthdays. Well this was very sweet of him I thought. I hoped he opened a bakery and I hoped I got cakes from him every year for free.  I am proud to say now that he ran a successful bakery in town till recently, when he closed it down and yes, I got what I hoped for.  Every year on my birthday, I got a huge cake and every year would be different shape.

Eddie uncle left, with an idea planted in his head, I never thought he would be a regular visitor to our home for the next 2 decades and more. But he was. He regularly visited my dad , sought his advice on business, dropped by to check on me and my sister Ana regularly giving us gifts, pampering us with his freshly baked bread, pastries ,cream buns and many more delicacies. He was a big food enthusiast and a foodie himself. He used to speak to my mom on various Mangalorean delicacies which had the potential to make it big in the world. He always thought we Mangalorean’s never promote our food well.  He had great ideas to showcase to the world the likes of sanna, mootlin, neer dosa to the world. But I guess he got stuck in the rat race like most of us- taking care of his family.

I don’t know from where I grew a fondness towards him. Possibly his frequent gifts and cakes initially brought him close to me, but as years passed Eddie uncle and I began having talks on business, politics, sports, current affairs and also on local topics. The talks my dad had with him, were now between us.

We met in his bakery, where he made it a point to give every kid who came, a piece of candy. I remember recently when my sister visited Eddie uncle’s bakery, out of habit he offered her a candy too. Though embarrassed, my sister took the candy J and so did her two brats.

I think we actually became chaddi buddies, when I entered high school. High school, as per my parents was going to be tough. Growing boys can have varied influences – bad company, drugs, cigarettes, alcohol and a fascination towards girls. I think I was purposely put in a school right opposite Eddie uncles “Mascarenhas Bakery”, so that he could keep an eye on me. Looking back, I am glad they had put me there. I had good friends in school; I had great company outside school, where Jenny, Ana, Jason and I forged a special relationship. Jenny and Ana were pretty close to each other, whereas I was forming a tighter bond with Eddie uncle.

It has been almost 23 years now, since I first met Eddie uncle on that humid morning in 1994. Many things happened in the last 23 years. I am now 33 years, studying in university pursuing the eluding PH D and he was a ripe 65 years old, still not shying away from giving me company .Over the years we have discussed many deep philosophies which could have changed the world, many silly things which were a waste of time, seen many tragedies around us, lost a few family members and friends, seen some ups and downs in our professions, but the bond kept growing in spite of all these setbacks.

As said earlier, even to this day, when I am at home, I meet Eddie uncle and Cecilia aunty almost every day – either in the church, or at Kini maams hotel, or in the fish market or on the beach. Halealve is a small village after all.  Well this was the story of how I met Eddie uncle and how we became friends and I am glad that he is around me, whenever needed.