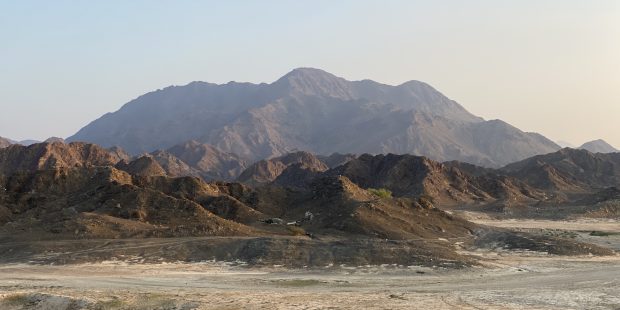 As the fear of the raging pandemic was waning or I would say becoming ineffective, a few close family friends planned a road trip.

“Fill your tank. We shall see as we drive”, was the generic opinion of everyone. The boredom of the pandemic was clearly showing. Everybody wanted to get out of their four walls. There was a big world out there, waiting to be explored.

The onset of the cold season in UAE is an awesome time. Pleasant weather conditions combined with amazing farsighted infrastructure makes UAE one of the most desirable tourist destinations during these times.

We set out in the morning towards Ras Al Khaimah, one of the emirates in the UAE, which as per me is a complete package of everything UAE has to offer. It is a rare mixture- sand, beaches, dams, farms and the city lights, putting it on par with its wealthier brothers.

“Showka Dam” a message relayed across the three cars via WhatsApp group.

“Chai at the next stop”- the group consisted of three chai addicted drivers.

We stopped at the next sight of the fuel station. Chai is the most popular drink in the UAE. Everybody, irrespective of nationalities enjoys a cup of KARAK TEA. During my initial days in the UAE, I thought Karak was a variant of our Indian Kadak chai. It has been a decade and I still don’t have an answer, in spite of drinking many thousands of cups of this soothing brew.

Almost every station in the emirates has an Indian run cafeteria, which serves tea and is always crowded and we were the unfortunate ones to have stopped at one of the very few stations which did not have such a cafeteria! “Under renovation” the board said loud and clear. The restricted time within the four walls of my home has made me an expert in reading between and underneath these lines. Too much time to think!

The two- and half-hour journey to the Wadis was paused and resumed 4 times for either chai or bathroom breaks. Bathroom for ladies is a problem as the government run fuel station have clean bathrooms but long queues and bathrooms in private restaurants are not worth spending time in?. On one such stop, I picked up a portable gas stove, to make us our own Kadak chai.

“How nice it would be if there was a portable toilet too” the ladies said. A thought worthy to ponder upon! may be some other time.

Google Maps fails only a few times- this was one of the days. Luckily for us, none of had any great plans of filling up the dam anyway. Only once before had the google aunty failed for me and that was in Fujairah. I was told I had reached my destination and it was to the right, whereas to my right were a couple of donkeys braying as if their long-lost cousin had come for a visit! For a moment I contemplated on believing in the GPS aunty. What the hell? Too much technology was ruining our life anyway was a much convincing thought.

Putting the ever-dependent app safely where it belonged to- inside the box next to the driver’s seat, we embarked on drive that I will never forget in my life. Close to a decade in UAE, I had never seen the beauty of the desert. The narrow roads (for UAE standards) took us through vast green farms amidst dry parched lands, dry mountains resembling Scottish high lands, dried up waterways that probably danced with joy during the elusive rains, huge and small rocks alike and plenty of donkeys. Shuffling between concrete roads and dirt tracks, often on mountain slopes, we saw the real desert.

Everybody put their vehicles for test and passed in flying colors. I remembered the words of the good sales person who sold me my car years ago “Sir, how many times do you think you will go driving off-road. Don’t go for that option. A two-wheel drive is just fine for you” How true were his words? Until today! I cursed him. If at all I had a four-wheel drive!

There are plenty of dams in the UAE, probably for water conservation and we stumbled upon one such dam. What seemed like a catchment area was ideal to pitch a tent, but we had none and it was noon. One whiff of wind and all our food- pav bhaji and hot dogs would have been ruined.

After a couple of more memorable breaks, we reached Showka dam- it wasn’t crowded, much against our expectations. Hungry stomachs and thirsty throats were satiated and quenched here, on the foot of the mountains.

“I think mountains are better than the sea” said someone and everybody agreed. There was a peculiar beauty in these mountains- a beauty that I cannot explain in words.

I was bred on the shores of Karnataka and the sea has been my constant companion over years. Sitting on the pristine beach back home, anything could be solved by staring into the vast ocean. The moment when your eyes stretch as far as they can and yet, not locate the end of the ocean was that moment when your problems seemed miniscule and found a solution on its own. While the mountains did not give me that confidence, probably because I wasn’t used to them yet, they seemed to give me a sense of protection.

I am sure, everyone at this time had turned into philosophers. Everybody within their minds must have been speaking to Aristotle, Plato or Socrates, as there was pin drop silence, while we ate. Either hunger or philosophy!

As we finished pav bhaji and gobbled the hot dogs, Aristotle and his band of merry men, left us. It must have been the hunger then.

We spent considerable amount of time under the shelter of the mountains- many of us climbed the stairs to look at the dam, while I stayed protected under the mountain, staring at a lad who was climbing a cliff opposite to me, without any gear! There is a thin line between adventure and foolishness and the lad was definitely looked like a fool, from where I sat. From where he was, he must have seen a fool sitting on a chair and staring at him, instead of indulging in so called adventure!

Before we left to a spot which reinvigorated in me my desire to become an astronaut, we had chai. The Showka dam is well equipped with clean bathrooms and a couple of shops which provide some food.

Way back, when I was young, I had learnt to spot a few constellations – just a couple. For the next few days, I thought the only person who knew more about stars than me was the late Aryabhata. Such arrogance! If not for such arrogance, who knows, I would have been an astronaut today. Never know! While people with open minds to learn have reached the stars, I am still stuck with those two constellations!

We stopped our cars, a little in the interior of the desert, not very far from the highway. It was almost dusk now and the night sky was getting clearer. Staring into the clear desert skies is liberation. Sky usually opens up thoughts, but staring into the sky filled with stars is a whole different feeling. The Aryabhata inside me reminded me that years ago, I had wished for a telescope and this was the right time to wish again, as Christmas was just around the corner. I wished under a couple of shooting stars and Voila within a week, a brand-new telescope knocked on my door. Shooting stars work and so does convincing the wife that she is married to the next Aryabhata and to pay for that china-made beginners telescope I found on the internet!

I am sure that we both are sure that the same telescope will be put up on the internet for sale within the next three months. So much for Aryabhata!

There is so much to explore out there. The world is so big and there is so little time. As every good trip with beautiful people comes to an end, we bade good bye to each other saying “We should do it often”.

For the beautiful people who accompanied us- you know who you are. Thank you.