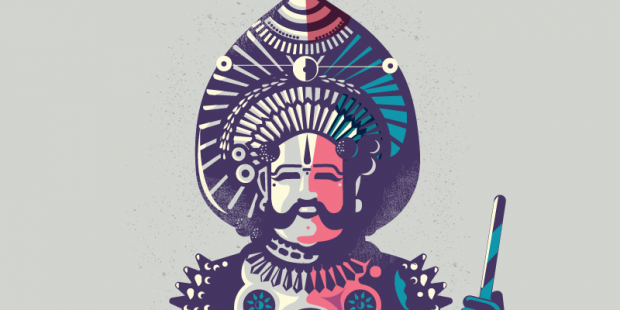 Why are bygone days the best? Always!

The sudden drop in temperatures in UAE reminded me of winters back home- especially the festive months of December and January. These were months of festivals: starting from Christmas late in December, all the way until the village temple festival late in January, or what we called Genda. In between these two, we celebrated New Year and church festival too.

Kodali, our village seemed blessed. Communities saw religion, not as a device for division but as an undertaking for unity. Kodali truly represented Gandhiji’s vision of Rama Rajya which was visibly evident on the last day of Genda, rather the last night of the festival, when the temple organized the epitome of coastal culture- YAKSHAGANA. Everybody from the village was at the temple grounds to watch the Bayalata.

Neil, I, and our friend Manja never missed this Bayalata; we actually waited for this splendid spectacle. I am neither a movie buff nor a theatre lover, but deep down within me I always loved Yakshagana, the age-old dance drama. The feverish anticipation before the show, the melodious music reaching a crescendo of sorts in the wee hours of the morning, the high-pitched climax, and then the lull aftereffect for the next few days- all these made me nostalgic.

We had one school in the village then and the school authorities used this festive season to good measure by making it more festive- by arranging the Annual School Day celebration just after the Genda. Classes were shortened so that students could rehearse their art. The entire school got involved in these celebrations- starting with the main stage acting to backstage rope pulling, teachers managed to involve everybody.

Christian houses kept their Christmas lights on till the end of Genda, Muslim households lit the main roads leading to the temple, while Hindus decked up their abodes for the temple deity. The entire village would be lit up, making it difficult for outside hatemongers to identify homes, based on religion.

The temple was splendidly decorated with those shiny red, green, and yellow running lights, while the fields converted into a lively market overnight. Sweetmeats, savories, fruits, flowers, toys, and household items were put on sale. This was a window of opportunity for the entire village to start their year to enjoy- Women were the best customers for many vendors and so were their children, who hopped from one ice cream vendor to another, licking the watery ice cream on a cone, or the ever refreshing “Bella” candy.

“It is a bad addiction, Manja” Neil’s father used to tell Manja. “Unless one is careful, this can eat you up”. He gave many examples of stalwart Yakshagana artists who spent their entire fortunes on Yakshagana and ended up penniless.

The three of us were privileged. We were in the special convoy of the gentleman who sponsored the Aata- Neil’s father. This was an age-old tradition- Neil’s family sponsored the field and contributed generously to make this spectacle possible. We were given a special tour of the green room or the make-up room. It was a splendid experience to see the actors paint themselves- they usually take 2 to 3 hours to get their face painted, before they adorned that heavy headgear and the hallmark dress of Yakshagana.

Manja and I used to slip away from the honorary front row seats when the AATA began. The actual fun was when one watched the actors bring characters alive from the edge of the field, close to the mundakkai upkari stalls or the simple tea stalls. Manja brought this huge carpet (Mandri) from his home, which was reserved for the three of us- Neil, myself, and Manja. Sometimes, Neils older sister Irma also joined us. Poor Neil had to make pretexts of “susu” or “hunger” to get out of those suffocating front seats. What fun we had on those cold nights with bright stars above us and Manja’s Mandri under us!

The aata transported me to another world- a world where there was no discrimination, no wealth, no poverty, no caste, no creed- a world where everybody was equal. I never knew my mind could detach so much from this worldly bane and transcend to a whole new world, a world which I could only dream of. The flickering oil lamps around the stage and those distant tube lights placed at random poles all around the boundaries of the field, were the only source of light on an otherwise dark night, whereas the sound of the ever-noisy diesel generator, which provided most of the power needed for the speakers, which magnified the music and transported it to those few who were lazy enough not to come to the Aata.

Yakshagana truly has come of age, is what I am told. There are troupes in and around the coastal areas of Karnataka performing this age-old dance drama, there are schools which teach this art form to youngsters and there are stories and plots which are picked from various religious texts. However, as I surfed the internet, there was not much information about Yakshagana.

One of the reasons could be the fact that Yakshagana is still concentrated in our coastal villages, where even to this day Yakshagana is closely connected to religious thanksgiving, where the sponsor would pay for the expenses of the aata, as a mark of thanks for the favors he or she has received. Yakshagana, probably fails to make a mark among the fast-paced youngsters for the sheer length of shows, which goes for the entire night.

I am not a Yakshagana artist or even remotely knowledgeable of its past, its procedures, and its practices. With this article and the next few, I will try and present this art form to the best of my ability, delving into its glorious past, the method, the preparation, and the spectacular performance.

If given a chance, I would really love to sit under the stars and watch an awesome AATA, along with my friends Neil and Manja.